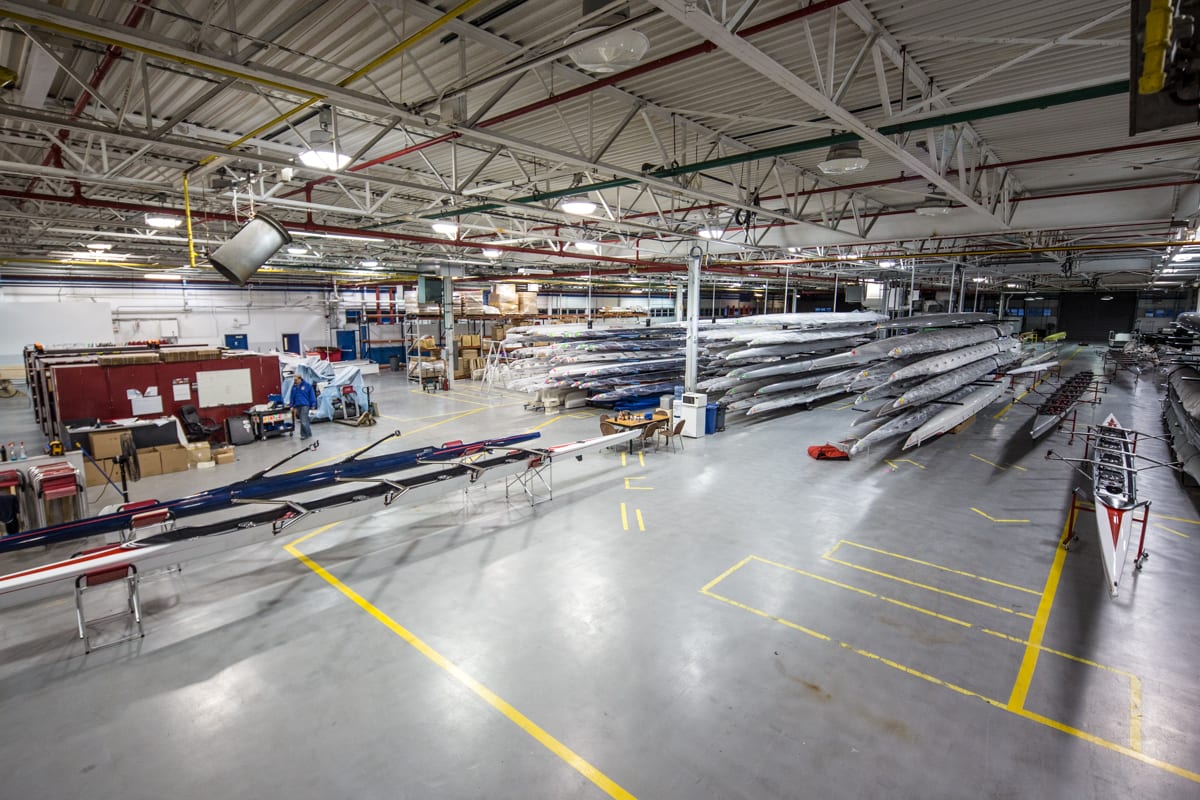 When RowAmerica-WinTech Racing’s Chairman, Howard Winklevoss, first opened the doors at 1010 Atlantic Street in Bridgeport, CT. he knew the site would be perfect for their ongoing effort to improve the sport of rowing. Flanked by United Technologies/Sikorsky, University of Bridgeport and the Olmstead designed Seaside Park’s 325 acres of lush lawns, shady glades and sports fields, RowAmerica is a welcome addition to Bridgeport’s revitalized waterfront development as well.

This new facility adds another exciting chapter to the growing history of WinTech Racing, in operation since 2003, who has production done at a 500,000 sq. ft. facility in China. see: www.sinoeaglegroup.com.

While they have been “doing business as” WinTech Racing for the last ten years, RowAmerica has always been the parent company hovering over several independent divisions. Saugatuck Rowing Club, WinTech Racing Shells, King Racing Shells, RowAmerica Rye and the newly formed RowAmerica Boat Repair are all RowAmerica companies that cater to the growth of the sport of rowing. “RowAmerica’s goal is to make rowing possible when it wouldn’t be otherwise and to introduce the sport to communities that do not yet understand the sport. We want to give kids from all walks of life an opportunity to better their lives through rowing, a sport we all know is second to none when it comes to building character,” said Winklevoss.

The new Seaside Park facility currently accommodates WinTech Racing Shells, King Racing Shells and RowAmerica Boat Repair in addition to a budding state of the art composite technology research and development facility. That sector of the operation will lend itself directly to WinTech’s main production facility in China and eventually to the extended family of WinTech Racing distributors all around the world. “A tremendous effort has been made over the course of the last year to see this facility become operational,” states Winklevoss, father of Facebook twins, Cameron and Tyler. “We are nowhere near capacity, but our commitment to giving back to rowing will be thorough. It’s a boon that we are part of a resurgence of business in Bridgeport, Connecticut as well. Have you seen this coastline? We’ll be able to run three seasons of outreach programs directly across the street.” RowAmerica currently occupies roughly one third of the available space on this gated lot. There is an additional 100,000 sq. ft. with a 70’ paint booth and industrial oven already on site that they have access to if need be.

It’s coincidental that right down the street from RowAmerica’s headquarters is a foreseeable two thousand meter race course with miles of undisturbed water for steady state training. RowAmerica Bridgeport, a proposed club positioned along that waterway, is being planned as well. That facility could provide a harbor for several local universities and outreach programs.

Formerly tucked in an industrial section of Norwalk between Rowayton and SoNo, the 10,000 sq. feet that WinTech Racing occupied from 2003 to 2012 just wasn’t big enough. “Norwalk didn’t lend itself to the sales and repair process after 2010,” stated facility manager, Christian Hawkins. “When we started in 2003 we latched on to the first place that we could get a boat into and that became more and more difficult as demand for inventory grew. After we determined that a boat repair center was something we wanted, we began a thorough search for a hub that would allow us to grow according to our vision. Bridgeport provides ample space for all of that and more.” One intriguing addition to the story, and one that highlights tremendous potential, is that Sikorsky used this same headquarters to build the reconnaissance RAH-66 Comanche helicopter for the US Army.

It’s widely known that other manufacturers aren’t particularly thrilled about the boat repair industry. In addition to the day-to-day challenges of building rowing shells, it is very difficult work and can be time intensive while sharing labor previously dedicated to fabricating new boats. That is why most rowing shell repairs have largely been handled by a few small, dedicated repair shops. RowAmerica purchased a lot of the heavy equipment from one of those shops and now offers comprehensive repair service for all brands of rowing shells, not just their own. Because there isn’t another repair shop for hundreds of miles, shell repair service for all brands was an extension WinTech felt necessary while fulfilling the “one stop shop for everything rowing” goal they’ve been driving at since day one. “This facility is a tremendous addition to the operation and our customer base is already taking advantage of the convenience,” states Brendan Crotty, President of WinTech. By the look of the racks filled with off brand shells, numerous well known clubs are also taking advantage of the service RowAmerica Boat Repair is offering the sport’s marketplace.

RowAmerica Boat Repair is located just off exit 26 on Connecticut Turnpike (I-95) and can handle any repair, large or small, on every brand of boat on the market.

If you’d like to stop by, call ahead and see for yourself what they have going on behind the scenes. By the look of it it’s safe to say that this won’t be their last extension to the rowing world.

Posted In:
Prev Next

Founded in 2003, RowAmerica was formed in order to better serve, support, promote, and expand the sport of rowing. RowAmerica owns and operates RowAmerica BoatClubs nationally, manufactures and provides boats for sale and lease under the Wintech Racing and King Racing brands, and repairs and services boats of any make and model at its RowAmerica Boat Repair facility.